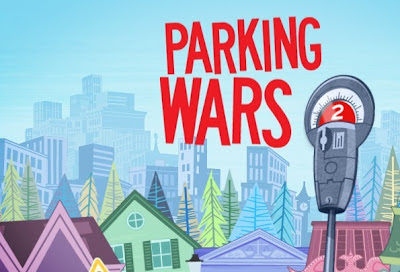 Reality TV show producers often times either impress/disgust me with their ability to create such TV ready train wrecks with the people they're paying to participate. Whether it's cutting your tits up with your daughter on display at 3:00 in the afternoon on cable television or a bunch of people starving themselves and plotting against one another for cash prizes, the guys behind these shows know how to bring the pain us television viewers desire.

Today's exhibit of recorded pain is a bad smelling slice of television known as Parking Wars. The show follows around traffic cops while they ticket, boot, and tow people's cars all over Philadelphia (and in later seasons Detroit and Providence, RI). This show is interesting because it constantly plays the they're just doing their job card to possibly get you to not hate the bumbly Parking Authority employees they've selected to follow with a camera.

This would be perfectly fine if they weren't representing the most inept part of the government I could probably imagine, or used to imagine before this show came out. Now the whole fucked up system that's clearly designed to increase Uncle Sam's cash flow by any means necessary is on display for everybody to see. In that light I guess  I should commend the producers and especially camera crew of this show, they're like extreme journalists out there documenting this dark, twisted, no prior job skills required career for us all to marvel at while we pretend this dude isn't a spot on look-a-like of your drunk Uncle Tommy.


If it's not a handicapped spot, dangerous loading zone or someone's property, i.e. an apartment complex or in somebody's driveway, besides those things, what exactly is a "no parking zone!?" I feel like they just randomly select spots and decide it's size and shape based on some greedy algorithm we don't know that only comes up with dollar figures. I'm down with capitalism and everything but must we poke holes in the water balloon EVERYWHERE? I went to high school for free and have access to an open line of credit at my local emergency room, tell the meter maids to back the fuck off.

And about the meter maids, how long does the "I'm just doing my job" excuse I mentioned earlier fly with us anyway? It's generally accepted among polite English speaking people to hate people who work at video game stores and financial advisors, why can't we hate the tow truck guy? Taking somebody's car from their driveway on their property because they havent paid tickets is theft. How the hell are they supposed to pay the ticket if they don't have a car to go pay the ticket with? And taking somebody's car from the front of their house because it doesn't work? Now you're just making shit up. Like on hoarders, this show documents innocent citizen's individual rights being taken away law by law.


Not that the citizens of (mostly) Philadelphia don't make you feel like they deserve it... a lot.  Half the show is city employees rambling about themselves and the other half is like some sort of a would be, fucked up reality TV star amateur night, with some of the ugliest people in Pennsylvania hamming it up for the camera. I'm sure anyone who lives in Philly might scoff at that statement, but seriously, I'm surprised they don't just solve all these parking ticket violations by just bombing the entire city off the map.

If we stop hating tow truck drivers and meter maids because we feel that people are generally mean to them, then what's next?  Cops? Waitresses? Do you really expect me to eat at Denny's and NOT give Gloria, my favorite waitress, her daily put down? It would kill her. All I'm saying is it's cool to be respectful and understand your enemy's point of view, but sometimes, shit happens. And if you're the messenger who's job it is to deliver that shit, it might be okay to shoot you.