Dispatches from the Shooting Gallery

In my old age, I don't make it out to clubs much anymore. It was only when I arrived at 9:15 at InCahoots in Jacksonville, Florida to watch Sharon Needles perform that I realized gay bars do late nights. Having nothing but time and brain cells to kill, I decided to wait in my car and have more to drink while I listened to some music. On the floor of the passenger seat was The Book of the Bizarre, a garage sale find of yesterday and The Monster Show: A Cultural History of Horror, a library book removed from another state. These seemed to be up Sharon's alley, and I've heard reading in clubs is having a resurgence. Apparently the talent comes in early too. Much to my surprise and delight, Sharon was sitting at the bar. I did the whole "I already contacted your manager (guy sitting next to you) for a blog and holy shit you're here" thing. We discussed a shared love of whiskey, the last book he'd read: Confederacy of Dunces, left handedness (both of us guilty) and that he and Kurt Vonnegut smoked Pall Malls. I showed him the books and let him take his pick. He chose The Monster Show and loved the fact it was displaced from a library. He signed the other book for me. It was a great fan moment all around. The early bookworm got the conversation. 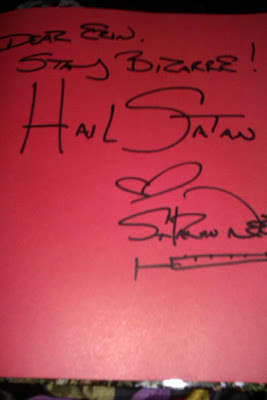 He performed, in no particular order of idol worship:
- Lords of Acid 's "Pussy (box banger)" complete with Catwoman mask and cat food.
- Marilyn Manson's "Beautiful People" with a blender, dollar bills, Campari/blood while drinking and spitting the resulting "Fantorum".
- Whitney Houston's "I Will Always Love You" with funeral veil.
- Julie Brown's "I Like Them Big and Stupid".
- Irma Thomas' "You Can Take My Man" dressed as Peggy Bundy.
- Eurythmics' "Sweet Dreams."
- Blondie's "Rip Her To Shreds."
...and the Yeah Yeah Yeah's "Heads Will Roll," throwing Phi Phi O'Hara some shade dressed as Freddy Krueger. He also made mention that he was too smart for G-d. Yes, it was pretty much the mix of showmanship, camp, goth, pop culture, and kitsch you would expect from the fan favorite of RuPaul's Drag Race season four and all around not your typical drag queen. She isn't and it is incredible. 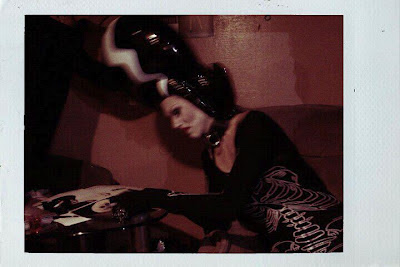 In between sets, the "VIPs" (people who paid an extra 10 dollars for a signed photo and some star quality) got to meet Ms. Needles and take a shot. It was a large crowd, but she signed them all. She had posters and temporary tattoos for sale, with more merch to follow. To call her fanbase rabid would be an understatement. You would have to look to the underworld to get the level of devotion. She made my picture out to our shared love of Twin Peaks. She may think she's Laura Palmer, but I think she's really an Audrey Horne. Beware.
While I was talking with Ms. Needles before the show, I managed to slip a napkin I had written some questions on into her purse with my e-mail address. To my surprise and delight she actually e-mailed me back! What a professional son of a bitch:
BULLSHIT ARTIST: Tom Le Coyte, from Leicester UK, wants to know if you make your own outfits. Do you feel that your outfits represent your attitude, or do you think performance is ultimately more important than the clothing you wear?
Sharon Needles: My outfits are determined by my performance, sometimes I wear things I don't like to numbers I love, and sometimes I wear things I love to songs that I hate. It's all conceptual.
BSA: Many performers of all stripes are inspired by a dark past. Campy humor, the theatre of drag, music... are all outlets for various vices. Would you care to disclose any particular event that led you to your current incarnation?
SN: Horror movies, New York underground club scene, current media, nostalgic feminitity, and Halloween.
BSA: John Waters or William Castle?
SN: How dare you!?
BSA: Who is your spirit animal?
SN: Party.
BSA: Would you rather be Debbie Harry or Vali Myers?
SN: Fuck pop punk, I'd rather be Jayne County. (Vali Myers was not pop-punk... but I digress - ed.note).
BSA: If you were to create a concept album of a famous person or event, what would it be?
SN: I would not base an album on something so simple.
BSA: Is there a particular design or "haus" that resonates with your style either personally or professionally?
SN: Haus of Haunt.
BSA: Favorite album/novel/auteur/telenovella?
SN: Gary Glitter, self-titled.
BSA: What is your reaction to all the positivity you generate? Does it feel great to know that you inspire people?
SN: Daunting, and yes.
BSA: Anything you would like to share is welcome.
SN: I love bad drag. Remember, being booed off stage is just applause from ghosts. 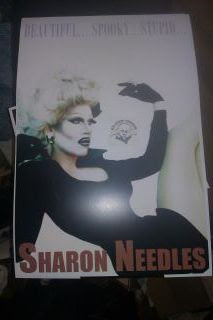 Look for Sharon around the country, she'll be staving off fans in a lost netherworld under your city or fucking your boyfriend in a venue near you. I'll be sure to catch her when she's in Gainesville, Fl, on April 12th, right after Hunx and his Punx.
Posted by Keaton Wilder