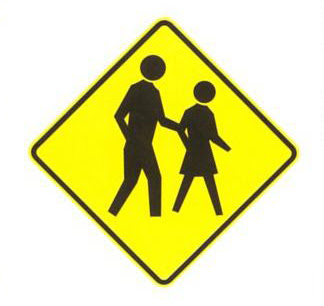 Every day the streets get more flooded with people on expensive contraptions proudly flying around like every bit of time they save cures a little bit of cancer. Meanwhile, I'm staving off many forms of cancer and heart disease with my natural aerobic workout known as walking. Seriously, why is it I feel that people who don't walk look at everyone who does as more and more of a burden, sympathy case or sideshow exhibit for those sitting on their asses in cars and on bikes, i.e., pretty much everyone.

Walking is the one thing everyone can do besides the disabled and babies. Walking invented dancing, and dancing invented the devil, so walking is thereby cool for eternity. I don't know if I would go as far as screen printing a black and white patch dedicated to walking for my jacket, but you get the point (plus since it is walking, I guess no matter what you're doing you're usually doing it so no need to overexpose the trend).

There seems to be a common misconception that pedestrians are more susceptible to crime in certain areas and at night because they aren't on a bike to get away or a car to hide in. Besides being an unnecessarily paranoid point to make, in actuality the opposite is true. While "hitting the pavement," you're actually more safe than anyone else on the street.

If somebody tries to attack you while enjoying a late night meander by yourself, they're already at a disadvantage to you because you're in an alert standing position. Somebody on a bike could just get knocked on their ass with a stolen bike to boot and a person in a car is obviously going to get a broken window and maybe worse. A pedestrian can pick up a stick faster than anyone else on the road that may or may not have a weapon and it's just you so your head's in the game.  Even on the other side of the spectrum, attacking somebody on foot leaves you flexible to take off in any direction, over a fence, etc... whereas a bike or car just puts a recognizable feature on you and riding away on a bike after attacking or robbing someone is just kind of pathetic. A car might work better in a team but still, someone might get that license plate. 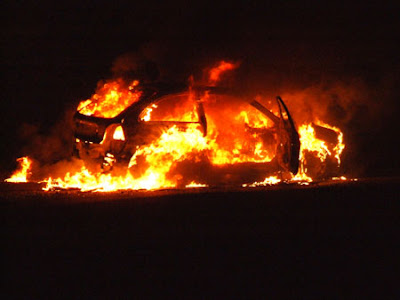 Speaking of cars, quit fucking eyeballing me when I'm walking across the street. If you're at a red light just casually look at your radios and straight forward, in a dead stare so I know you're thinking about something else. And drivers at stop signs on the back roads, please just proceed as quickly as you can. Nothing pains me more than getting into a wave war with a car stopped at a stop sign on a dead ass back road while I'm trying to walk. Your car is faster than stoned me, dude, it'll take .5 seconds to hit the gas and proceed. I'm already stopped because you got here a second or two before me so why cant you just go? Do you really need to get those brownie points for yourself in case you die in a car accident on the way home (whoa, have you ever thought about how once or twice in your life or maybe even more you've probably seen some stranger minutes or hours before they suddenly died?)? People with tinted windows are the worst. You people are fucking sick. Closing yourself off in your either: hand sanitizer/fake chemical-clean black leather sweat box, or filthy ass human arm pit of your car gawking at everyone like a lazy cow. I wonder if potato chip fed meat is better than grass fed. 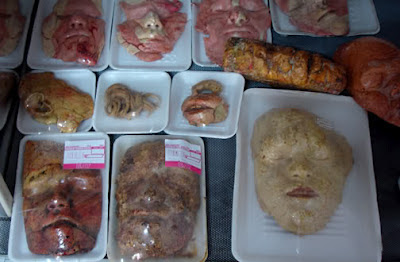 When I was younger I used to walk to school because I enjoyed it. Who wants to get rushed to school? I hated it there so much I needed a little walk beforehand to clear my shit before the stresses of elementary drama engulfed me for six and a half hours. Walkers have the luxury of being able to absorb a lot more than somebody flying by on a rubber wheeled apparatus of death, so every day was an introspective 22 minute adventure through my neighborhood. Excuse stories regarding missing homework were acted out and funny things to say to classmates planned during a lot of those walks, although I guess if I had any friends that were still alive at that point they would have been walking with me.

I remember I had this one crossing guard lady who was probably in her 60s or 70s and worked this corner I crossed for a few years. She always brought this small white dog with her that chilled in the car while she helped kids cross the street. She was definitely old but had this really smooth, weird, shiny skin that my sister told me she achieved by rubbing some weird stuff on her face all the time. She was nice. I wonder what ever happened to that nice old lady, probably died or something.

Walking increases the chances of finding dropped cash and cool stuff, like knick knacks or an occasional ID. Sometimes you find weird people, like prostitutes or drug dealers. Like most common problem solving suggests, a good I don't fuck with you, you don't fuck with me attitude is generally permitted when encountering those types. Unless, of course, you're looking for drugs or a prostitute, in which case you might want to fuck with them. Other more innocent but interesting people can be found while walking; like homeless people begging for change, crazy people not begging for change, people who exercise, people whose bikes have flat tires, drunk people, people whose cars are broken down, door-to-door salesman, people walking their dogs, stray dogs walking themselves and cool people like me who do it for the love of the game, and lack of anything better to do. 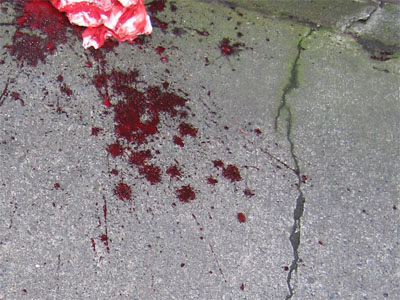 I'm proud of my status as a modern wayfarer. There's this guy I work with who passes by me every day on his bike while we're between shifts. About every sixth or seventh time I see him he says in a not antagonistic but sarcastic tone: "get a biiiiiike." I usually just laugh and say "hell no, bikes are too breakable." I'm really imagining different ways he could crash his bike, not because I want it to happen but it is a possibility and your mind tends to wander out there on the sidewalk.

*I actually kind of hear a lot of people bitching when they walk but it's mostly transplants.
Posted by Slash Dribblez