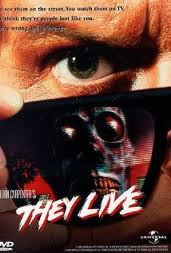 Oh, the 80s. Our children's children will never let us forget that mullets and Reaganomics happened on your watch. It was a magical time for the US economy and the beginning of a new era of capitalism. John Carpenter was pissed about this and made the film They Live in response to what he saw was a dangerous cult of consumerism. But I digress, the man created one of the most inadvertently hilarious movies of all time, not to mention brilliantly highlights some of the most ridiculous aspects in American culture. Here's my top four reasons to spend an afternoon watch this film: 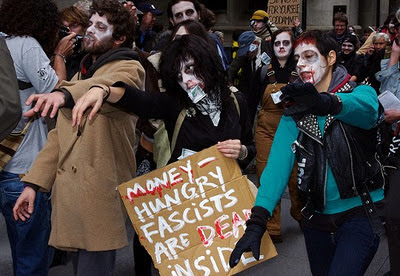 1. It pretty much predicts the Occupy movement.
They Live is based on the short story by Ray Nelson called 'Eight O'Clock in the Morning', in which a man (simply known as Nada) stumbles upon an alien plot to control the human race with subliminal messages in popular culture. These aliens are hidden amongst us, camoflauging themselves as part of the rich and elite humans that inadvertantly (and sometimes purposely) help their mission of total dominion along, despite the obvious injustice that such imbalance of power brings.
Sound familiar? Hits curiously close to home when you realize that we face similar problems over 22 years later. With the Occupy Wall Street movement sparking a renaissance of social and political activism across the world, this movie is especially de ja vu in the way it reflects the middle class struggle of present-day America: to realize the death grip of consumerism and dismantle our corporate programming in order to create a better way of life. You know, without tearing down rainforests and funding Chinese sweatshops (The iPhone 4 is going to be the last, best iPhone, right? You wouldn't lie to me would you, Corpse of Steve Jobs?) . 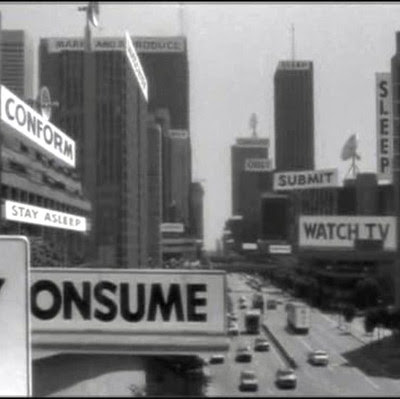 In the revelation scene, Nada scans the magazine shelves with his new pair of sunglasses that allows him to see past the alien manipulation. In place of the usual Golf Pro and Vogue covers, Nada is confronted with the truth behind advertising. Obey. Consume. Marry and reproduce. No independent thought. Slogans hidden from the unaided eye because of a clever alien signal that hides the subliminal messages. Come on, this is already sounding awesome, right? 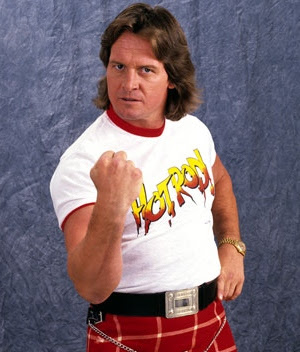 2. "Rowdy" Roddy Piper.
You've got to love the 80s for another reason: Foisting upon our young minds that in order to save the world (in just about every 80s action movie, anyway) you have to be a 6'5'' beefcake without two brain cells to rub together. In this case it's none other than WWF wrestler Roddy Piper, Carpenter's equivalent to Arnold or Sly. It's important to note that only the audience is in on this joke. To every character in the film, Nada is just a tall, quiet, pectorally-gifted construction worker that happens into turn into an expert in hand to hand combat when confronted with every single antagonist in the movie.
Seriously, how many reaction shots does it take to for you to figure out the plot of this film, Roddy? It could have just been the editor's fault. I mean, no one could possibly write the hero role to be that stupid on purpose, right? Or... John Carpenter was taking some serious anti-logic pills the day he wrote this scene:

Good job, Nada. Your grocery store rant basically blew the only advantage the human rebels had in the entire movie. I mean, how long must it have taken to develop those fucking sunglasses? 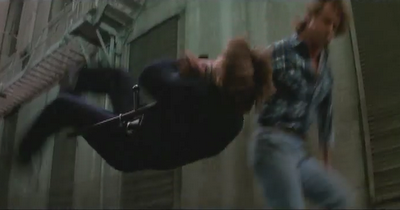 I guess you could always arm bar them off our planet...
3. It's highly quotable.
If you've ever played Duke Nukem, you're familiar with the most badass line in all of video games. “I have come here to chew bubblegum and kick ass. And I'm all out of bubblegum.” Roddy Piper actually wrote that line for his wrestling interviews, but here are a few of my favorites:
“The golden rule. He who has the gold makes the rules.” - Frank
“They are dismantling the sleeping middle class. More and more people are becoming poor. We are their cattle. We are being bred for slavery.” - guy on TV
“You ain't the first son of a bitch to wake up out of their dream.” - Nada
“Mama don't like tattletales.” -Nada
“We gave the steel companies a break when they needed it. You know what they gave themselves? Raises.” - Frank
“They live. We sleep.” - graffiti on the wall in the church
4. Probably the greatest one-on-one fight scene in cinema.
The most memorable part of They Live has got to be the fight scene that takes place when Nada confronts Frank, trying to get him to wear the sunglasses that have so drastically changed his perception of the world. It's the way he tries to persuade Frank that leads to this masterpiece of fight choreography:

These are the PROTAGONISTS fighting each other for over five minutes. I wonder if, at any point before Nada met up Frank, did he think, “Maybe I'll just explain to him what happened and the reason why I'm not the mass murderer people seem to think I am”. But no, he's Roddy Piper. And this is the 80s, mind you.. Bloodshed was necessary.
Posted by Rara

Email ThisBlogThis!Share to TwitterShare to FacebookShare to Pinterest
Labels: They Live. Movies