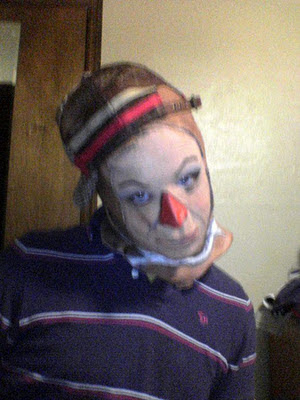 
I, Slash Dribblez (pictured above), your humble and drunk narrator into the depths of everything cool and funny, sit here typing with my life on the line -- and you're the only one that can save me. Mark Harvey, an old friend of ours and recent contributor to Bullshit Artist, has broken into my home this morning and has me at gunpoint right now as we speak.  He has a shotgun to my head and says he's going to blow my brains all over the fuckin floor right in front of me and mail little plastic bags of guts to my family unless you listen to/consider his shitty ass song and movie recommendations that he wrote down on a napkin for us.
I know, that sounds crazy. Song AND movie recommendations? I had told Mark to fuck off with his shitty suggestions months ago because the suckiness would undoubtedly destroy the blog, but alas, desperation has set in and now the only song endorsement I can consider is anything that doesn't sound like the inside of this shotgun. So why don't we just humor him for a hot minute and go over some of this dumb shit, okay? He claims we probably haven't heard of any of it but I doubt it.  Hit it Johnny:

KillaQueenz are basically the newish Australian Salt-n-Pepa. This song fucking rocked Myspace like three years ago and I guess Mark still thinks it's still worth listening to. Personally, I feel it could use a little more airplay from some angry drunk chicks I know. It's always weird when I freak out about songs like this because it's badass but in a pretty girly way. But, like I said, I do like the song and don't in fact give a fuck how "girly" it is, so I guess KillaQueenz and me are just keepin it real togetha 4 eva. 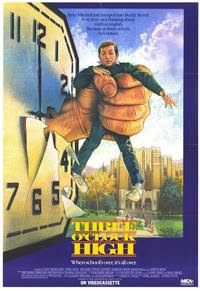 Three O'Clock High was one of those movies that came out in the 80s that nobody saw but was on TV a lot so like SOME people know what you're talking about but mostly not .  I'm surprised they don't have t-shirts for this in Hot Topic or something because it mixes a dark, panicked tone with a typical high school comedy for that era pretty efficiently, i.e., perfect indie nerd/blogger fodder. The film revolves around high schooler Jerry Mitchell, a pretty average student assigned by an inept teacher to do an article on a new kid in school nobody knows.... because he's huge and scary and looks like what happens when you have a learning disability but are evil. Jerry fucks the whole first meeting up of course and is forced to meet the dude (I think his name is Buddy, like for real) and get his ass kicked UFC style. I don't want to ruin anything but the movie ends with a multiple suicide, of course not in the movie but with you and whoever else after watching this garbage*.
Slayer - Disciple (2001)


If you ever listened to any of Slayer's stuff it's actually all pretty boring. Obviously some dude with a small dick you know would immediately scoff at that but give me a break, nobody listens to that shit. And of course by "that shit," I mean every other Slayer song besides this one. Disciple is definitely one of Slayer's more mainstream rock sounding tracks but it's all for the better; it's catchy enough to keep you interested, while keeping enough speed and aggression to black out and choke somebody to death in the process. If you really need something that's awesome and fast but not so aggro you can try this little baby: 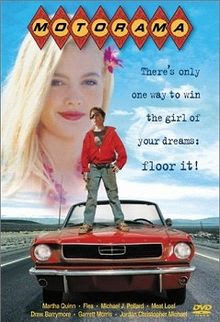 Motorama is this weird ass road trip movie about this kid who's parents suck that steals a car and starts playing a gas station traveler's game called MOTORAMA, in which you have to collect every letter of the word MOTORAMA to win $500,000. I fucking love this picture. It has a dark, surreal tone that goes well with this runaway kid's journey through the movie's dream-like, fictional American Southwest; where the protagonist buys things with pretend currency created by the filmmakers in a stolen car, all in chase of the American dream: free money. Supplementing the dreamy atmosphere are some Meat Loaf and Flea cameos, and the whole thing just feels like some eight year old with a movie idea was given a budget, but the kid with the budget is you and it's fuckin awesome!

Ah yes, Gangpol Und Mit are an electronic act from France that makes glitchy, atmospheric sort of electro pop stuff that's often accompanied by colorful animated movies and cartoon shows that they produce themselves -- I guess there's two guys and one does the music and one does graphic design. Most of their shit is instantly catchy and unless you hate weird electronic music,  universally awesome. The duo have been known to go on children-specific live tours and used to be on Kap Bambino's record label, WWILKO Records. This is another thing that I'm surprised  hasn't caught on as hard as The Knife did but I guess we'll see, hopefully the gift certificates to Wendy's they paid us for this plug are worth it. 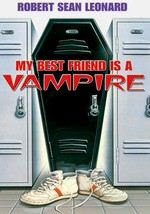 I guess the title and dope picture of a coffin locker pretty much say it all. This movie is often confused with Once Bitten, which is more like a romantic comedy meets horror, where this is more like 80s teen comedy/coming of age horror hi jinks. This movie is tight because the main character becomes a vampire and the only thing him and his best friend could decide to do is work with it, because sometimes you just gotta work with shit and live your life. My mouth always waters every time I see the part where they buy him huge steaks and things from the butcher and blend them into shakes to feed his vampire hunger for flesh or whatever.

You're probably gonna hate this, it's pretty noisy. But if you like noisy then maybe it is for you. Noisy is such a vague term, you know? You could be talking about Sonic Youth or somebody chewing with their mouth open, but categorizing shit is always impossible. EC8OR was a digital hardcore band on Alec Empire's cleverly named label, Digital Hardcore Recordings. They pretty much sound like Atari Teenage Riot but EC8OR was ill because they were obviously stepping it up a notch in craziness and song diversification. Thanks to programmer Patric Catani's wide range of beat making skills, their songs would run the gamut from careless, catchy, digi-punk to this, whatever it is.  And if that song or any of this paragraph made sense to you, welcome to the Mark Harvey best friend club and click the next song immediately.
Ah, there you go, all typed. If you even know or remember what I was talking about in the beginning of this, Mark is fast asleep on the floor and I'm safe and sound, here in my ramshackle house-fort in beautiful New Los Angeles. I thank you kindly for sitting through all of that waste in order to protect me, because you love me. But you know what? I love you.
*Opinion of editor.
Posted by Slash Dribblez