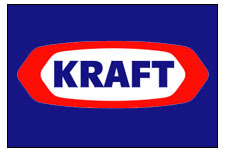 "Make Today Delicious"
I first realized that Kraft Foods was the leader of all things tasty one day in high school while I was inncocently scrumpchling a jar of Claussen Pickles. You see, Claussen Pickles have been my favorite thing in the world since I was a kid. My mouth is watering now just thinking about them. So I'm eating pickles and studying the deep green Claussen Pickles label, and out of nowhere I notice the Kraft Foods emblem in a corner, winking at me like it does on a box of Kraft Macaroni and Cheese! It kind of surprised me because I had always considered Claussen the company responsible for my favorite salty treat, but it was actually Kraft Food Company! That's like reading Watchmen and then finding out Alan Moore wrote an entire run of Swamp Thing comics.
I naturally threw my hands up and said fageddaboutit, but as time went on and I was more frequently high at the grocery store, I noticed something: Kraft was everywhere. I shit you not, these guys have their hands in a lot of things we want to get our hands in. Dont believe me? I'm gonna list these snacks/foods off metaphorically like attacks to your disagreement, with every dank item disabling your arguement barrier: Capri Sun, Chips Ahoy, Planters Peanuts, Miracle Whip, Stove Top Stuffing, Nilla Wafers, Kool-Aid, Cheez Whiz, Lunchables, Oreo Cookies, Ritz Crackers, A-1 Steak Sauce, Fig Newtons, Wheat Thins, Cadbury Cream Eggs -- imagine eating an Oscar Mayer Weiner slathered in Philadelphia Cream Cheese? You know that sounds fuckin delicious -- and you know what? It's all Kraft motherfucker. 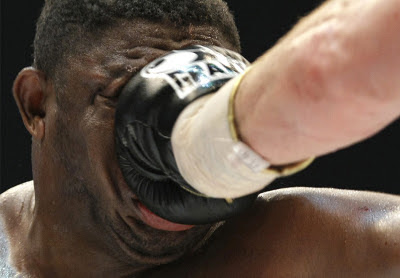 See what I mean? Besides replacing your metaphorical face with ass, Kraft Foods have been hard at work for the past 108 years providing the world with delicious fixings and straight forward dedictation to pleasing their customers. The Kraft Foods website is basically an easy on the eyes Kraft recipe headquarters; also complete with full sections on healty living, budget eating (which includes the section "why snackrifice?" on budget snacking), and some social networking shit where you can share recipes and make friends and stuff.

As the world's second largest food company, they battle daily with Nestle for control of the world's main food reserves; and participate with non-profit organizations like KaBOOM!; which specializes in taking money from Kraft and building playgrounds for kids (awesome), and dedicating $3M to Save the Children, another non-profit specializing in saving children. Through colloboration with National Latino Children's Institute, they created Slasa, Sabor, y Salud, a program aimed at helping Latino families learn more about health and wellness without having to deal with some English speaking gringos. 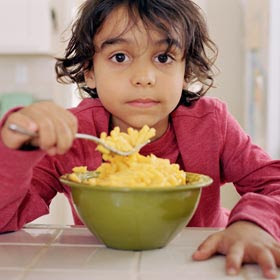 Being that Kraft sort of dominated my childhood due to my then snack-based diet, I got curious about what kids in 2011 think about the company. They mostly just talked about mac and cheese: "It's so cheezy it sticks to walls," exclaimed 11 year-old Nick Decassa. Eric Strathmore, 11, also commented "I like their mayoinaise. It comes in a squeeze bottle that I squirt my sister with." That actually sounds  pretty fun. The best thing about Kraft when I was young were those crazy ass, whacked out commercials with intense animation bits of dinosaurs driving through cheese sauce. It's probably the type of thing you see if you actually managed to eat too much mac and cheese:

And who can forget the Blue Box Blues?
That pretty much brought tears to my eyes. I think this little girl's passion about the product basically sums it up: Kraft Foods is the most seminal food manfucaturer in the world. If somebody fairly looked at the facts presented today and disagree, I'd chop my own arm off out of principle. God bless you Kraft Foods Company, for your continued effort to not puss out and just give me what I want.
Posted by Mark Harvey