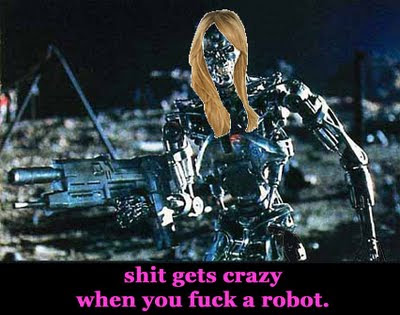 If there was one device from science fiction I wouldn't mind becoming a reality, I would say hands down it should be the sex robot. I mean who wouldn't choose sex robot!? I'm sure food replicator from Star Trek and jet packs or something would come in as close favorites, but sex robot seems like the most obvious choice. Plus if they were as efficient as they should be (enough so to want to have sex with), then they should be able to double as a sex robot/cook that dressed up as a maid and cleaned up after you -- if you're ready to fuck the thing, then with proper clean up it should make you cereal too. 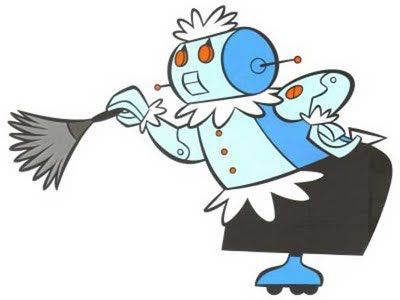 But thats the problem with sex robot technology as it stands today: they don't do shit. Robots still aren't advanced enough to mimic something you want to fuck without coming off like Arnold Schwarzenegger at the end of the first Terminator movie. That's what I sort of thought of when I saw a picture of the Roxxxy Sex Robot that everyone (not including anybody I know in real life) was talking about a year ago. For only 7 Gs you can have this thing sitting in your house; following you with it's calm, dead eyes every time you walk passed it. The only thing Roxxxy actually does that a regular sex doll cant is carry on (unrealistic) conversations with you. Other current sex bots make noise, vibrate in naughty places and perform other really simple tasks; which might be good for an android/doll fetishist, but I would probably be using it to throw pies at it in a matter of days. The point is, if I spend $7,000 (which I totally have) on something to get me off over a long period of time, it better be able to do that thing to my balls my ex-girlfriend used to do.  Here's the Roxxxy Sex Robot and her totally not creepy inventor here: 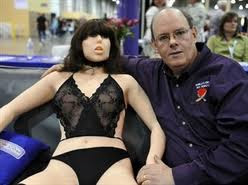 I told you he's not creepy. I think one day there could be a gagillion dollar, penis and vagina-saving business involving real life sex bots -- but I think we're still a ways away. The act of fucking a hot girl is just so sweaty and personal it's going to take scientists a really, really long time to recreate it artificially. It's like fake weed that will never get you high or vegetarian bacon, a valiant effort but never the same. So when it comes to banging machines in my lifetime that will do whatever I say and love me forever; I remain unconvinced, however, eagerly optimistic: if you threw a brand new Roxxxy in front of me right now and told me to try it, I totally would. But until then I'm not financing one until they're fully "functional" and look more like this:

Okay this one I'm almost kind of attracted to, but these are just sex dolls that do even less than the Roxxxy Bot. Check out this one that looks authentically bitchy:

That's the stuff. Install some ass tickle and water bong upgrades (her arm would be detachable) and we'll be together forever <3.